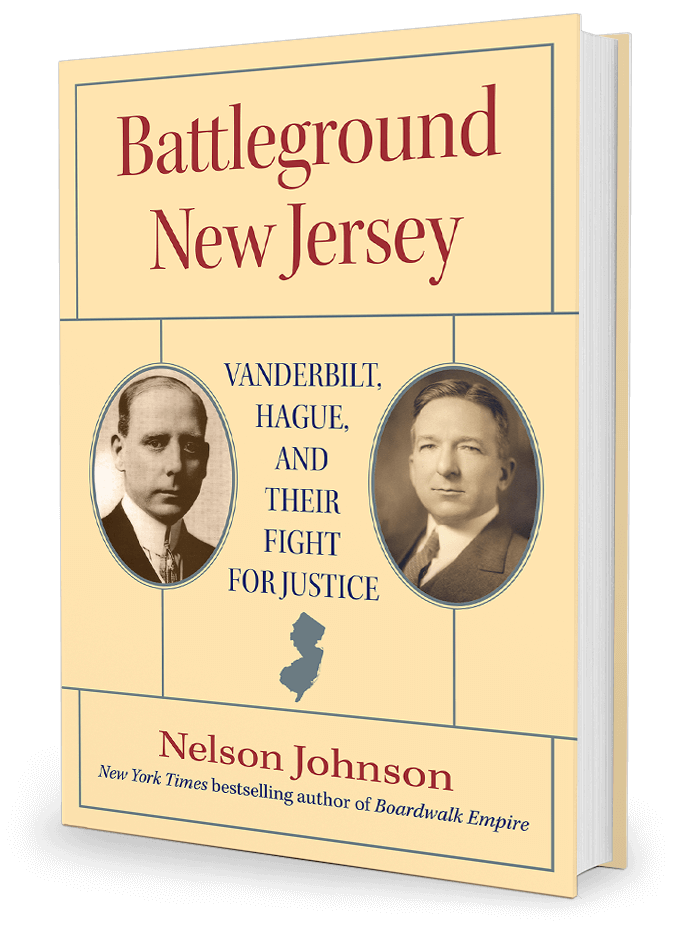 Vanderbilt, Hague, and Their Fight for Justice

New Jersey’s legal system was plagued with injustices from the time it was established through the mid-twentieth century. In Battleground New Jersey, historian and author of Boardwalk Empire, Nelson Johnson chronicles reforms to the system through the dramatic stories of Arthur T. Vanderbilt – the first chief justice of the state’s modern-era Supreme Court – and Frank Hague – the legendary mayor of Jersey City. Two of the most powerful politicians in twentieth-century America, Vanderbilt and Hague clashed on political disputes and over the need to reform New Jersey’s antiquated and corrupt court system. Their battles made headlines and eventually led to legal reform, transforming New Jersey’s court system into one of the most highly regarded in America.

Vanderbilt’s power came through mastering the law, serving s dean of New York University Law School, preaching reform as president of the American Bar Association, and organizing suburban voters before other politicians recognized their importance. Hague, a remarkably successful sixth-grade dropout, amassed his power by exploiting people’s foibles, crushing his rivals, accumulating a fortune through extortion, subverting the law, and taking care of business in his own backyard. They were different ethnically, culturally, and temperamentally, but they shared the goal of attaining power.

Relying upon previously unexamined personal files of Vanderbilt, Nelson’s engaging chronicle reveals the hatred that the lawyer had for the mayor and the lengths to which Vanderbilt went in an effort to destroy Frank Hague. Battleground New Jersey illustrates the difficulty in adapting government to a changing world, and the vital role of independent courts in American society.

Breaking new ground, Nelson Johnson gives a colorful account of the relationship between Frank Hague and Arthur Vanderbilt, leading to the adoption of the 1947 N.J. Constitution. This is a good read and an important book for anyone interested in New Jersey history.

Battleground New Jersey is an enjoyable romp through an important era about which most people know little. Nelson Johnson brings to life people and events for which we have, at best, a hazy image. His balanced presentation of the two principals, Arthur Vanderbilt and Frank Hague – conflicting in character as they are – is a reflection of his thorough research.