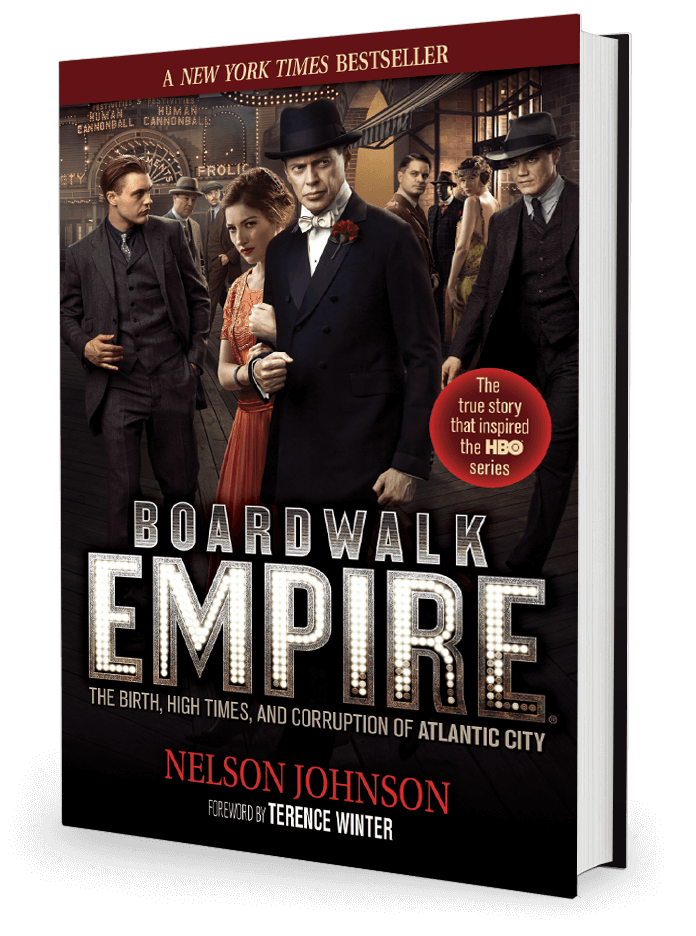 The Birth, High Times, and Corruption of Atlantic City

When Nelson Johnson began work as solicitor to the Atlantic City Planning Board in 1980, he was confused by the craziness in City Hall. He needed to “make sense” of things. His instincts those of a bookworm, he headed to the Atlantic City Library where two knowledgeable librarians fed him dozens of books by. Two years later, upon reading 20-25 books on Atlantic City history, Nelson arrived at three conclusions: (1) no one had ever written a complete history in a single volume, chronicling the city’s history from arrival of the railroad in 1854 to present day; (2) no published work had acknowledged the indispensable role of African Americans in building the city into a national resort: and (3) no one had discussed the organic nature of political corruption in Atlantic City.

The third conclusion ignited Nelson’s curiosity. Understanding the why, how and who of the role of political corruption woven into the town’s fabric sent him on an adventure that spanned more than two decades. He began by pursuing personal interviews and diving into long-ignored archival materials which sent him back to the library many times. Over time, Nelson painstakingly pulled together forgotten details of the powerful people who held sway over Atlantic City as the resort rose to prominence in the early twentieth century.

Throughout most of the twentieth century, Atlantic City was controlled by a powerful partnership of local politicians, racketeers and businessmen. Funded by payoffs from gambling rooms, bars and brothels, this corrupt alliance reached full bloom during the reign of Enoch “Nucky” Johnson (no relation to author) – the second of three bosses to head the Republican machine that dominated city politics and society.

In Boardwalk Empire Nucky Johnson, Louis “the Commodore” Kuehnle, Frank “Hap” Farley, and Atlantic City itself spring to life in all their garish splendor. Boardwalk Empire is the true story that inspired the epic HBO series starring Steve Buscemi, Michael Pitt, Michael Shannon and Kelly Macdonald, produced and directed by Terence Winter of “The Sopranos” fame.

I knew I was in the hands of a capable writer by the time I began to read the second page… Atlantic City in the 1920s was a was a place of excess, glamour, and, most of all, opportunity. Loud, brash, colorful, full of hope and promise— it was a microcosm of America. A place of spectacle, shady politics, fast women, and backroom deals, but also a real community with real people…a place of real Americans, a melting pot of ideas and cultures.

The opportunity to play Nucky Thompson, and rule over old Atlantic City with such a wonderful cast of actors was the most fun I ever had as an actor. The real Nucky was also an interesting guy.